THE LIVING THEATER OF MIRON ZOWNIR

Miron Zownir, the photographer. Or rather, the “Teutonic phenomenographer” (Village Voice) or, as the great American writer Terry Southern characterized him, the “poet of radical photography”, author of the 73 medium- and large-format photographs shot between 1977 and 2019, mainly in the metropolises of New York, Berlin, and Moscow, but also in Kiev, capital of his native Ukraine, and in London, San Francisco, and Hamburg, accompanied by a selection of his films, exhibited at the Center of Photography, Palermo in his first major retrospective in Italy. In short, Miron Zownir is perhaps better described as an artist with a strong affinity for theater.

An artist whose theater has infiltrated his photographic research from the outset. The actors in his theater being the men, the women, the transsexuals, the handicapped, the disabled, the sick, the junkies, the dropouts, the poor souls that he encountered during his explorations of the city and its periphery, the countryside, the sex piers between the West Side Highway and the Hudson River, and in the parks, by night, where fast and sometimes drug-addled sex was performed by gays, hustlers, prostitutes, addicts, and the unfortunate; in the clubs of the punk and post-punk scene in New York, London, and Berlin; in the underbelly of a city in perennial reconstruction, as Berlin was before and after the fall of the Wall; or in the East Village, where Rudolph Giuliani obliterated every trace of autonomy and freedom, paving the way for the more familiar New York of financial bubbles and neoliberal ideology. Almost always managing to catch them in that precise moment when, as if in a sacred act of giving, they were willing to offer their being body in a gesture of extreme effectiveness and truth, which we could reasonably define as a performative act. And Zownir was always there, ready to capture it, not to let it vanish into the decay of individual and collective stories, and to then bring it back to us as an act of testimony, of life lived at the limits of the possible. As if it were the documentation of the gestures of a behavioral artist, or of a Wiener Aktionismus member. At times so extreme as to border on self-mutilation. We could choose to see Miron Zownir‘s photos, and the eye often invites us to do so, as a survey of a socially desperate, depressed, suffering, and diseased community. But we should instead look at each individual shot as an irreducible unit of instantaneous dramaturgy, in which the eye of the viewer is led to participate in the lived experience of the subject, and of the photographer who captured it. In each of these shots, what invariably strikes us is the theatricality of the gesture, accompanied by the power of grace and the fragility of a residual, outcast, troubled humanity. Also striking, in that moment in which we meet people whose human experiences we observe and absorb with a certain horror, is the elegance that announces itself, clearly and imperiously, in a sort of epiphany of glory. None of this has anything to do with a quest for an aestheticized, self-referential exercise. As one often sees in photographs that treat the people portrayed as if they were social themes, superimposing a sort of artist‘s gaze, perhaps from the past, even from Classical times, perhaps with the idealistic intention of redeeming human suffering through precious artistic and cultural references in the worst good taste. Trying to capture beauty at any cost, even human cost, in the discomfort and pain of others and, distorting matters even further, with a liberal recourse to the alchemy of post-production. A piteous attempt at conveying pietas. But we will find none of this in the work of Miron Zownir. The beauty and the power of his photos lies entirely in capturing that glory and, at the same time, the disquiet rooted in the explosive gesture that appears before him. His works go beyond the pain that informs them, in the dual sense of pushing past the sensory data and giving it form, to then reveal to us the topical moment of a chance encounter, generously given to, or stolen from the scene of the existing. It is no coincidence that the coverphoto, that little naval officer with his pants down, standing at attention (was he ever a sailor?), has the same expressive power as the fragment of a performance by a dancer from Pina Bausch‘s Tanztheater, the same ability to verge, in the folly of a simple gesture, on d calage and the overturning of meaning. The meaning situated between apotheosis and derision in an act of recognition of power, or better, in the simulation of power and its recognition, producing as if by magic its disavowal, and inadvertently mocking it. The apparent anarchic declination of taking oneself too seriously. A pure act of theater. 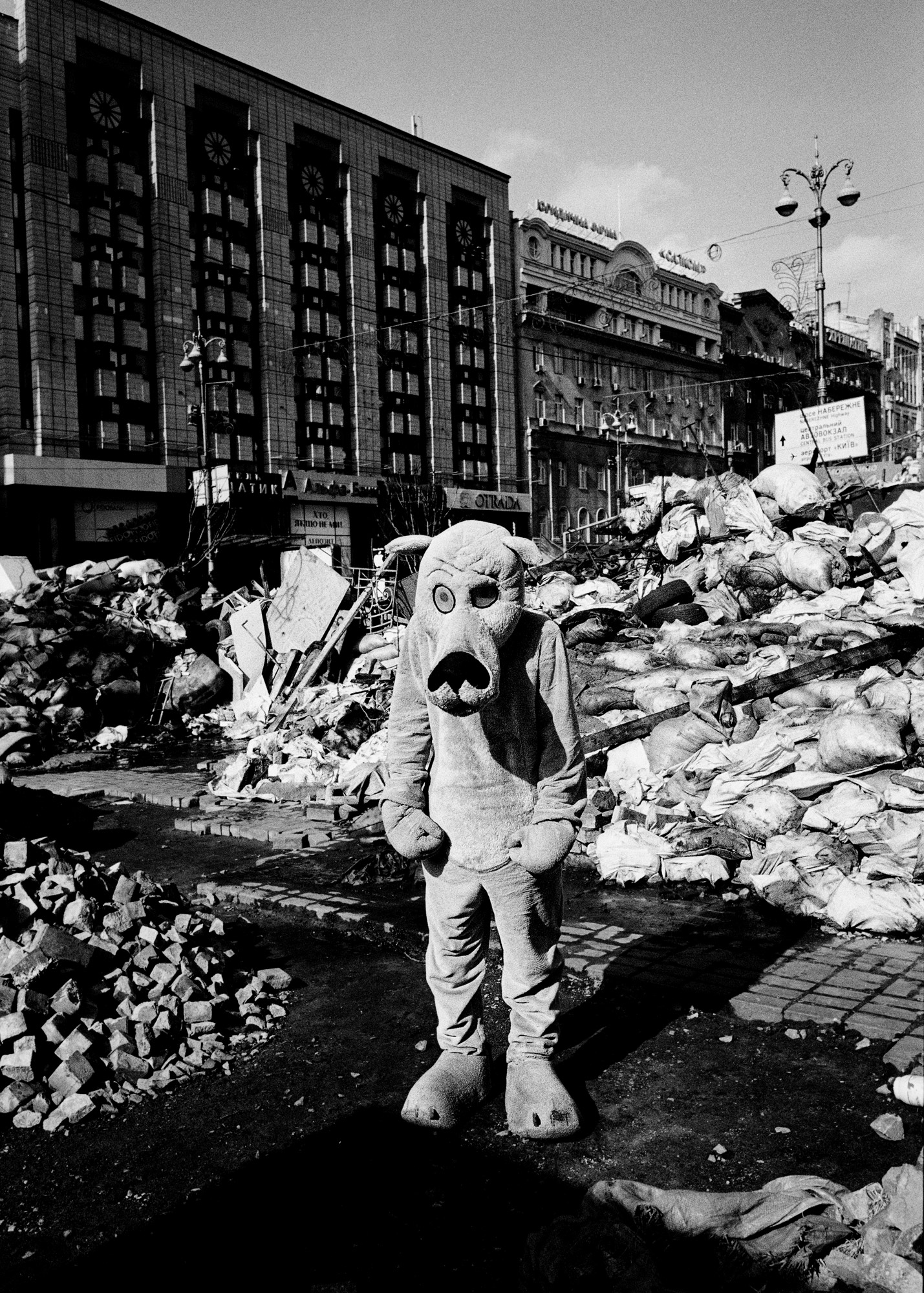